The BOHEMIA Project Completes Its Census in Mopeia with More Than 10,000 Households Registered

Completed in six months, the census is being followed by mass administration of ivermectin, the backbone of the project.

10,376 households have now been registered in Mopeia, Mozambique, within the framework of the BOHEMIA project. The census, which began on 23 June, consists of numbering the households that will take part in the project and collecting data on the people who live there: how many, whether they have had malaria recently, whether they have livestock, etc. Now that this process has been completed, mass administration of ivermectin to the population and livestock is scheduled to start in January 2022. According to the project’s central hypothesis, ivermectin, an anti-parasitic drug that is safe for humans and animals, kills mosquitoes that consume it, thus reducing malaria transmission.

According to Saimado Imputua, a demographer at the Manhiça Health Research Centre (CISM), the census was expected to include data from 12,579 households located in several hundred neighbourhoods in the Mopeia district. Out of the 358 neighbourhoods in the district, 250 were selected to carry out the project. The remaining 108 neighbourhoods were ruled out due to exclusion criteria such as difficulty of access. The final number of households included in the census was slightly lower than expected due to incidents such as refusals, houses which had been destroyed, and absences.

Before this census began, a “mini-census” was carried out between October 2020 and March 2021. “For data collection in the mini-census, a short version of the current questionnaire was used to gather information about the number and characteristics of households in Mopeia district,” explained Humberto Munguambe, also a demographer in the project. The census will thus update and expand the data collected in the mini-census.

As part of the census preparation, the local team led by Imputua and Munguambe held several meetings with the survey and field supervision teams to refresh their knowledge. In order to assess the effectiveness of the questionnaires and the ability to assess and resolve possible unknowns, the team also conducted several pilot sessions in the excluded neighbourhoods, thus avoiding data duplication.

Within this context, community liaison officer Amilcar Nacima, ISGlobal doctor Hansel Mudaca and field activities supervisor Zacarias Pontavida gave an interview on local radio in which they announced the start of the main census. “It was an opportunity to talk to the communities about BOHEMIA and explain the project’s objectives, why the Mopeia district was selected and, most importantly, to encourage listeners to take part in this study”.

BOHEMIA is a consortium led by ISGlobal and funded by Unitaid. It includes two African institutions: Centro de Investigação em Saúde de Manhiça (CISM) in Mozambique and the Ifakara Health Institute (IFI) in Tanzania, and three academic partners: Bern University Hospital, Oxford University and Virginia Tech. The aim of the project is to reduce malaria transmission by administering ivermectin to humans and livestock. 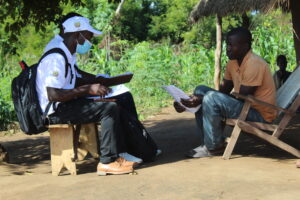