Technological Innovation: A Key Element in the Fight Against Malaria

Inoque Antonio Capece is 27 years old and lives in the district of Mopeia, in Mozambique. For the past year, he has been a field worker for BOHEMIA. Every morning, Inoque Antonio drives several kilometres by van to collect data on the population and territory of Mopeia, one of two project sites.

Numerous malaria-control strategies have been deployed in different parts of the world. Some have been very successful, as demonstrated by China’s recent certification as a malaria-free country by the World Health Organisation (WHO). Many are based on the findings of clinical trials of new drugs for malaria. Volunteers for these trials are typically recruited through health care centres. Although BOHEMIA is a clinical trial, in this regard it is quite unusual.

“Our project model is the opposite of what you normally see: our field workers have to visit every home in the study area. In Mopeia, this means visiting nearly 25,000 households,” commented Paula Ruiz-Castillo, a postdoctoral researcher at BOHEMIA. “First we have to carry out a census, which means assigning each household a number and obtaining basic data about the people who live there: how many people there are, whether or not they have had malaria recently, whether or not they have livestock, etc.”

As Ruiz-Castillo noted, the complexity of the project lies not only in how the data are collected, but in the complex logistics of organising all the field workers, like Inoque Antonio, who will visit the tens of thousands of homes over a period of several months. “Once the census is complete, we can begin the actual clinical trial: we distribute the drug and collect further information—for example, about people’s use of the health system, possible adverse effects of the drug, and the health status of the participants.”

“The complexity of the project lies not only in how the data are collected, but in the complex logistics of organising all the field workers, like Inoque Antonio, who will visit the tens of thousands of homes over a period of several months”

Inoque Antonio and the other field workers carry tablets equipped with specific software to help them do their work. “Digitalisation has been the key to progress in many malaria projects, especially those conducted in rural parts of Africa,” explained Ruiz-Castillo. “Before these tools were available, data collection was done with pen and paper, which wasted a lot of time and led to many human errors.” But what is so special about BOHEMIA’s technology? 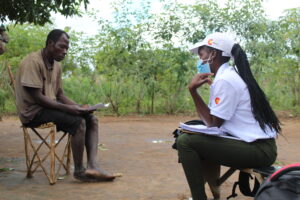 The BOHEMIA project is being carried out in Mopeia, Mozambique, and Rufiji, Tanzania. Mopeia has around 135,000 inhabitants, a significant percentage of whom live in unmapped rural areas.

Inoque’s first task was to travel around a specific part of Mopeia, figure out where homes were located, map each home and assign it a number. Field workers also identify livestock enclosures—animals are an additional source of food for mosquitoes, and the BOHEMIA project envisages treating livestock with ivermectin. Finally, since the project aims to reduce the population of malaria-transmitting mosquitoes, field workers must also map all water bodies they encounter: rivers, ponds, wells, etc. since these are mosquito breeding sites.

This intensive mapping is made possible, in part, by project partner DataBrew. Using the open-access software OpenDataKit, they helped to develop technologies adapted to BOHEMIA’s needs. “New technologies have made it possible to map rural areas and organise data so as to optimise field worker visits and subsequent analysis,” commented Joe Brew, CEO of DataBrew. “One of the biggest advantages of our method is that it works as an offline app, meaning that the lack of Internet access in most of rural Mopeia has not been an impediment for the field workers.”

“Field workers must also map all water bodies they encounter: rivers, ponds, wells, etc. since these are mosquito breeding sites”

These customised tools, designed in collaboration with BOHEMIA, also make it possible to deal with the unexpected events that tend to crop up in projects of this sort. “Once a house has been counted and recorded, we paint a number on the front door. Sometimes, we later find that the number has disappeared, either because the rain has washed away the paint, or because the family has installed a new door, etc.,” commented Eldo Elobolobo, BOHEMIA’s data manager in Mopeia. “We can cross-reference all the data associated with that house and find it easily, even without Internet access. Out in rural Mozambique, this technology is pure gold.” 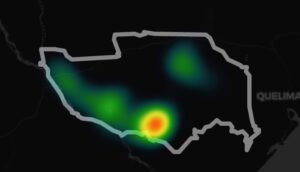 Error reduction is another strength of the technologies developed. “The role of the data manager is to prepare and validate the data,” commented Elobolobo. “Field workers typically spend several months collecting data. Once this is done, we do what is known as data cleaning—detecting and correcting possible errors.” The problem with this process is that data cleaning is performed many months after the data are collected, at which point errors are difficult to correct and the only option is to get rid of the affected the data.

During one home visit, Inoque made a data entry showing that house number 23 in the census was inhabited by four people who owned 111 cows. Owning 111 cows is not impossible, but it is very unlikely in this context. The software designed detects such anomalies and automatically sends a warning message to the data manager’s application. Upon detecting the anomaly, Elobolobo contacted him and asked for the number of cows at house 23, which was actually 11.

“If biomedical advances are the engine of progress in malaria control, technological innovation is surely the fuel that powers it.”

This customised technology also generates weekly reports from the collected data. “The weekly report shows all the progress of the previous week: number of houses counted per day, per week, per worker, etc. This allows us to greatly optimise our work and identify bottlenecks,” commented Paula Ruiz-Castillo.

A few months ago, while looking over the weekly reports, the data analysts noticed that one Tanzanian field team had been spending more time driving to one of the census areas than interviewing the local people. Having identified this location as a hard-to-access area, the project arranged for some field workers to stay there overnight until the census was completed.

“We sometimes think that progress against malaria depends solely on the development of new vector-control strategies and new treatments for the disease. However, technological innovation also plays a crucial role in implementing these strategies,” commented Ruiz-Castillo. “If biomedical advances are the engine of progress in malaria control, technological innovation is surely the fuel that powers it.” 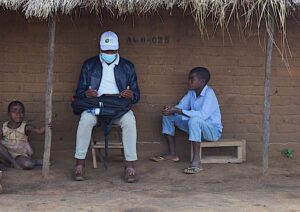